I heard it as soon as I walked into my room to get ready for bed – woohoo hoo hoo. An owl called from the cedar tree just 10 feet from my window. I looked and looked but could not see it perched in the large tree but every 15 seconds (I counted) it called.

How lovely to be lulled to sleep by the haunting call of such a majestic bird. How rare it is to have one visit my yard. In fact, the last time I saw an owl on my property was in 2012 and that visit for me was the mystical omen that started me on the path that I am on to this day. 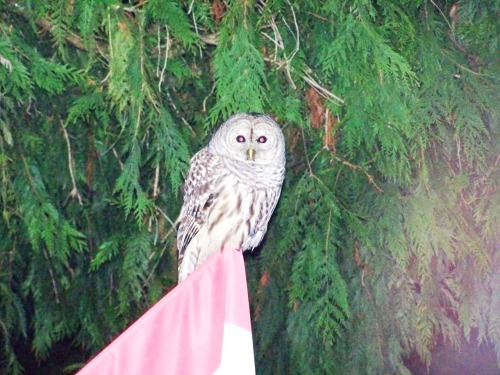 He arrived late in the afternoon and sat on the flagpole attached to my deck for almost an hour. He sat quite calmly and let me get within feet of him. I knew in my soul and with absolute certainty that he was there with a message of sorts but at the time I could not have told you what that message was. So started my interest in signs and symbolism and the hidden mystery.

As with my first owl visitor, I knew this midnight visit from owl was also meant as a message but this time I have more knowledge and wisdom to intuit a meaning. As with the last visit I sense that a new path is about to open for me.

I’ve felt it for a while now. Staring in July actually. I even gave myself the gift of a solar return astrology chart reading for my birthday in August with the hope of sussing out more clues. For me it’s feels like the changing of the seasons, like the winds of change are blowing my way.

Interestingly, owl spirit was not finished with me, it wanted to make sure I got the message. The next evening I was relaxing in the living room with hubby reading Nora Roberts’ urban fantasy, “Blood and Bone” while he was flicking around looking for something to watch. Hubby finally hit on the Tonight Show with Jimmy Fallon. I don’t watch T.V. as a rule but Jimmy was introducing the musical act of the evening so I looked up in time for him to introduce the Zack Brown band. In his hands was their new album entitled, “Owl”. I smirked to myself and acknowledged the sign. Okay, yes I get it, owl spirit wants me to pay attention but I really started to laugh when I returned to the book and in the very next paragraph the last sentence said this, “The woman lay sleepless in her husband’s arms on a cool autumn night listening to the incessant hooting of an owl.”

You might say these are all coincidences. You could also say it just the reticular part of my brain forming connecting patterns, and both would be true. It’s really whether or not you believe in the universal communication of signs, symbols and omens and I have had enough experiences with such things to pay attention.

So what are signs, symbols and omens and what is the difference between each of them? Well let’s start with symbols and symbolism because the other two stem from the ability to interpret them.

The universe communicates in symbols. Most psychics will tell you that they see symbols in their minds eye if they are clairvoyant, symbolic sounds or words if clairaudient, and symbolic smells and tastes if they are clairgustance to name a few. An accomplished psychic will have built up a mental library of symbols to understand and interpret what they are receiving.

While there are some symbols that are universal in meaning, most meanings are individual and personal to the person receiving them. The symbol of an owl in my case means a messenger of wisdom from the hidden realm because owls are nocturnal and hunt in the dark of night which to me is representational of ancient knowledge, magic and mystery. For others, owls represent death.

There are lots of great books and websites listing various meanings of symbols and they are a great place to start if you are totally stumped on what the image you are seeing means but the best interpretation is from your intuition. What your gut instinct is telling you is more than likely what the symbol is trying to communicate to you.  You might associate the symbol of an apple, for example, to represent health and wellness – an apple a day keeps the doctor away. Another person might feel that the symbol of an apple means comfort and home – grandma’s famous apple pie. Still another might intuit danger, as in a poison apple. All of them would be correct because if they acknowledge that the apple they are seeing is a symbol and therefore a communication from the universe the symbol was meant for them personally and their interpretation is the right one for them.

A sign is anything that occurs that gets your attention. It may be unusual or out of place to it’s surroundings or it may be as simplistic as something from nature vying for your attention such as a butterfly landing on your arm.  I like to think of signs as symbols in action. It could be a symbol such as an arrow literally pointing the way, a rare and unusual visit from an owl as in my case, or a found object in an unexpected place.

It could also be an experience or event such as meeting a person who has the power to advance your career, or a incidence that changes your perspective on a situation.

The sign could be as straight forward as seeing dark clouds on the horizon as you decide whether to venture out with or without an umbrella or as ominous as dark clouds on the horizon as you are making a life changing decision, Again, the message is meant for the receiver, it is their intuition that is meant to interpret it correctly. They only need to pay attention and look for a sign.

Omens are signs that predict an outcome of importance. They can act as warnings or signify blessings. Usually stronger in message and meant for the recipient to pay attention as omens can foretell the future. Most folks will get a strong gut feeling when experiencing an omen.

We tend to notice the warning omens the most and so we should. That nervous, sick feeling about a trip you’re about to take. Especially if challenges seen to keep popping up like a flat tire, a missed connection or a cancelled flight. Omens like these are meant as a need for caution.

Good omens seemed to be glossed over as good luck but they occur none the less. A clear, sunny day for your wedding when rain was in the forecast. The perfect lead up to a job interview from a perfect hair style and outfit, then a no traffic drive in, to a parking space right outside the business all combine to the best of omens that the job is yours. Blessings or lucky occurrences that point to a favourable outcome are all hallmarks of a good omen.

All of us at one time or another have asked for a sign when in a confusing or stressful situation to point the way clear, and who hasn’t experience an ominous feeling and just knew something bad was about to happen. Or maybe you are repeatedly seeing the same sequence of numbers, or white feathers in odd places or maybe, like me, a rare visit from an owl. Signs, symbols and omens, the callings cards of the universe. We all receive them but it is our belief, faith and understanding of them that decides how seriously we’ll pay attention to the messages being offered.

I am a true believer and I pay attention. The universe has sent me a message. The sign was the owl. The symbolism of that owl for me is based on my experience from the last time it visited. A new path is coming my way but because this time owl visited in the dark of night, the outcome is not yet clear for me to see. Such is the mystery of the divine.

The owl is a symbol of wisdom, telling me that I must grow and change in order to evolve as a human being. It’s eyes face forward so while I must wait to be enlightened, owl is telling me to look towards the future with confidence and know that this is a good omen.